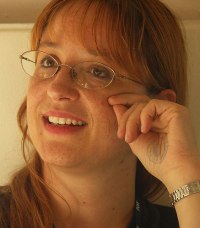 I’m an Italian science fiction and fantasy author and translator.

Over the years, I published several of my short stories on top Italian science fiction magazines, such as Delos Science Fiction with which I had an ongoing collaboration from 1998 to 2012.

In 2004 my SF novella ClipArt, belonging to my Kranio Enterprises Series and published in 2003 by DelosBooks, was awarded with the Italia Award as Best italian SF Novel. The novella has recently been translated and published in Hungary by Metropolis Media (Galaktika Fantasztikus Könyvek), together with “Origami” and “Hungry Light”.

My short story “Origami”, another in the Kranio Enterprises Series, was voted Best of Delos for 2002 by Delos readers and got the second place at the 2003 Italia Award as Best short story on a professional magazine, and was published on Galaktika, the top selling Hungarian SF magazine.

At the moment, on this website you can read one of my most successful and most published short stories, Hungry Light, the first short story of the Kranio Enterprises series, and A day in the hard life of God’s webmaster, but more stories are to come soon.
And if you can read Italian, there’s some more on the Italian version of the site.

In 2000 I translated “The Jackal of Nar”, the fantasy novel by John Marco and a large part of “The Collected Stories of Vernor Vinge” and the “Free Amazons of Darkover” collection by Marion Zimmer Bradley.

I live in Milan, Italy, with my family and work as Digital Marketing and Social Media Manager.